From my heart. Also news and upcoming events.

It’s been hard to write.
There’s an idea that I must put on my public persona in order to write these blog posts. Be cheerful, newsy, upbeat. I haven’t been able to do that.
Today my friend James McGinley made a comment – after a lifetime in the marketing industry (which I hadn’t known) trying to figure out how to say things so that people can listen, he’s quit, to just live an honest life. Today I will listen to that. Today I will take the chance that you want to go deeper, and that I might have something worthwhile to share.
Big things in the so-called outside world
One thing is that I’m watching more and more news about climate change, and other environmental problems, and feeling less and less optimistic about our chances of stopping the disaster. By that I don’t mean saving civilization, I mean preventing the end of the natural world as we know it, including human life.
The Mountains and Waters Alliance is based on a premise that civilization is mortally flawed in this way: we think we are separate from all the other beings (often from other humans too) and that the rest of the world is a resource for us to use. We approach as masters, not members. This is the flaw that leads to the situation we are in now, with dangerous environmental situations, politics of rage, extreme racism, and a desperate search for simple solutions.
My proposal is that we completely give up that point of view, unlearn everything we’ve been taught, and learn to listen to the trees, rocks, rivers, microbes, fungi, birds, predators, even mosquitoes. That we allow them to lead, and we follow with our whole being. That we listen more to indigenous peoples and less to civilized ones, because the indigenous have fewer layers to remove, but really to allow ourselves to not know what to do.
I imagine that there might yet be a way to change what’s happening, if we get out of the way. I also imagine that, if it’s actually the end, we might go there more human. But I’m still seeking salvation and am embarrassed about that. I’m particularly embarrassed because I’m trying to lead something. There are others with the same voice, all ahead of me: Charles Eisenstein writes eloquently, and I still love Daniel Quinn’s “living in the hands of the gods.” I want to learn this, living in the hands of the gods. Maybe that’s the thing that undermines all my efforts to be sensible and practical.
It’s time for me to go back to the zendo and back into the woods, at the same time as I continue to reach out to people. Opposite directions. Meanwhile I need to make money this summer. And it’s almost time for maple sugaring, followed by all the farm and land work – which I love.
So this is the plan, as well as I can say:

About money:
There was a fundraiser for solar panels, and it ended with about $600 short. I decided to make one last appeal – but am just getting around to it now. Meanwhile a homeless, activist friend sent $50. I’m thinking that this amount could easily be raised by $10 and $20 donations. The link is here: Donate. And just so you know, if you don’t tell me whether you want to take the tax deduction, I’ll do it at $50 and up. With gratitude for any amount. (Break-even point is about 35 cents.)
News here:
For four months this winter, Roy Dopson lived here. He repaired the culvert under the driveway, which had looked like a big expense and possibly an emergency. He dug up a lot of buckthorn. He has left me with probably next year’s firewood as well as this year’s. He did some weatherization on the house, and practically ended the mouse situation.
Two days ago Roy left to be teacher in residence at Mountain Valley Retreat in Southern California. He was going to leave a month later, for his firefighting job, but he’s gone now. 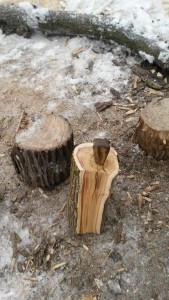 So I build my own fires again, shovel my own snow – and rebuild my body. I think about finding people, and try to be patient. I put up notices in some appropriate places. Some guests are coming for parts of the spring, and there is support and encouragement. Most recently a carpenter offered to do work for an incredibly low price, because he likes what I’m doing, so the wood cook stove will be going in soon. Maybe I can afford to have him do some other work too, making more space for guests and eventual residents.
Little things:

Next events:
Here is the link to the 2016 calendar.
Here is a link to the spring convocation, April 15-May 25. (I’m having trouble with words: convergence, coming together, or convocation, calling together? I think there’s a word I haven’t found yet.)
I’ll close with some of the words I wrote, trying to express this work for possible fundraisers; I don’t know if they’ll like it, but the words look good to me, as a prose version of the vow:

Blessings and peace to you all, whatever you are doing, wherever you are.
Shodo